Last week, I joined fellow Movement Party member Brandin Steffensen in Buffalo to facilitate “Now Practices: Researching improvisation as performance.” Over the course of five days, we formed a a temporary ensemble of dancers and spent more than 45 hours in Wasteland Studios, dancing and discussing dancing. Collectively, we built the culminating performance, “Now The Show,” from practices offered by facilitators and scores developed collaboratively by the group. We drew from Nancy Stark Smith’s group contact improvisation form, the Underscore; Brandin Steffensen’s game structure, Pentamode; Barbara Dilley’s Contemplative Dance Practice; and the Movement Party’s site-specific workshop, Relationscapes. Throughout the rehearsal process, we practiced these forms one after another, paying close attention to the phenomena unique to each and shared by each—moving towards a scaffolding for our improvised performance.

As part of this process, we got to spend a day at Silo City, playing in the abandoned grain elevators and surrounding landscape. Here are some snapshots from our Relationscapes adventures there: 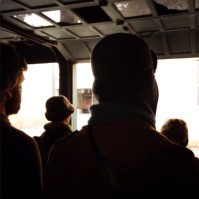 Huge thanks to Jim Bush for the photos and also to Nancy Hughes and the rest of the team at Buffalo CI for hosting this wonderful experience!